[J. Bradford DeLong] What are the new inflation hawks thinking? 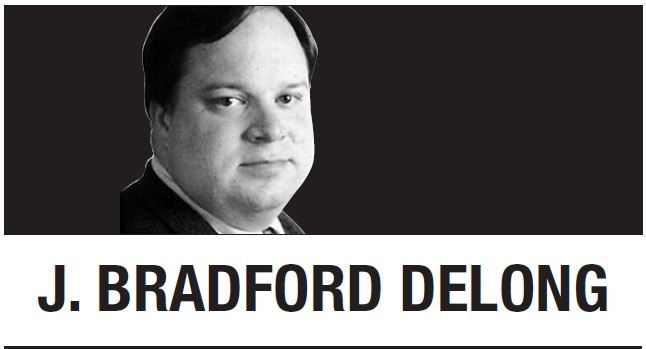 Back in 1992, Lawrence H. Summers, then the chief economist at the World Bank, and I warned that pushing the US Federal Reserve’s annual inflation target down from 4 percent to 2 percent risked causing big problems. Not only was the 4 percent target not producing any discontent, but a 2 percent target would increase the risk of the Fed’s interest-rate policy hitting the zero lower bound.

Our objections went unheeded. Fed Chair Alan Greenspan reduced the inflation target to 2 percent, and we have been paying for it ever since. I have long thought that many of our economic problems would go away if we could rejigger asset markets in such a way as to make a 5 percent federal funds rate consistent with full employment in the late stage of a business cycle.

There are three ways to accomplish this. One is to raise the inflation target back to the 4 percent range that prevailed during Fed Chair Paul Volcker’s tenure. Another is to boost demand so that a late-cycle federal funds rate of 5 percent would still be consistent with strong investment. And a third option is to flood the market with safe Treasury assets so that the safe-asset price premium on Treasuries falls, thereby allowing the late-cycle federal funds rate to increase.

When US President Joe Biden won the 2020 election and proposed his $1.9 trillion relief, rescue, support, and stimulus package, I welcomed it. If it passes, a substantial chunk of the money will go to people who could really use it, and the economy will have a better chance of returning rapidly to full employment after a year of plague and lockdowns.

To be sure, it would be better if a much larger share of the American Rescue Plan went to public investment. But unless one could be confident that 10 Republican Senators would be open to a public-investment push, one should not allow the perfect to become the enemy of the good. Besides, the package would lend itself to pursuing the third option -- flooding the market with safe assets -- so what’s not to like?

Apparently, there is enough not to like that many commentators whom I respect and admire have come out in opposition to the $1.9 trillion plan. I am not referring to professional Republican economists who always put partisan considerations before evidence, but to widely respected voices such as Summers and former IMF Chief Economist Olivier Blanchard. In a recent, widely circulated commentary for the Washington Post, Summers contends that:

“... While there are enormous uncertainties, there is a chance that macroeconomic stimulus on a scale closer to World War II levels than normal recession levels will set off inflationary pressures of a kind we have not seen in a generation, with consequences for the value of the dollar and financial stability. This will be manageable if monetary and fiscal policy can be rapidly adjusted to address the problem. But given the commitments the Fed has made, administration officials’ dismissal of even the possibility of inflation, and the difficulties in mobilizing congressional support for tax increases or spending cuts, there is the risk of inflation expectations rising sharply. Stimulus measures of the magnitude contemplated are steps into the unknown.”

Summers and Blanchard fear that, by de-anchoring long-term inflation expectations, the amount of stimulus being proposed could create inflationary pressures that the Fed will be unable to contain without causing a recession. They are not alone. Harold James and Markus Brunnermeier of Princeton University and Jean-Pierre Landau of Sciences Po note that a “new and dangerous worldwide inflationary consensus” is emerging.

Moreover, the American Enterprise Institute’s Michael R. Strain argues that Fed interest-rate increases should be avoided because “confidence in the Fed’s ability to fine-tune the economy is misplaced. When the unemployment rate goes up a little, it tends to go up a lot.”

What are we to make of these warnings? From what I can see, they all reflect a fear that the Fed might have to hike the federal funds rate and return it to the range we used to consider normal. I say “might” because, as the aforementioned critics acknowledge, any inflationary pressures generated by the $1.9 trillion package remain merely a possibility, not a certainty. It is equally likely that the new spending will end up filling holes in aggregate demand.

In any case, if the past 15 years of debates about “secular stagnation” and “global savings gluts” have taught us anything, it is that we should want to create the conditions in which a higher federal funds rate is warranted. The only explanation I can see for the new inflation hawks’ opposition to the size of the American Rescue Plan is that they do not trust that the Fed will raise interest rates when it becomes necessary to do so.

As such, they seem to want to keep the warranted federal funds rate at the zero lower bound indefinitely, out of a fear that it will at some point exceed the market rate. But that makes no sense, particularly as an argument against additional support for struggling US households.


J. Bradford DeLong
J. Bradford DeLong, a former deputy assistant US Treasury secretary, is professor of economics at the University of California at Berkeley and a research associate at the National Bureau of Economic Research. -- Ed.