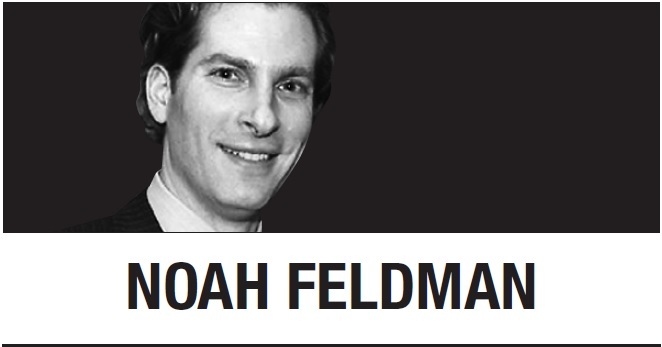 On Sunday, President Donald Trump tweeted that the executive branch will designate Antifa as a “terrorist organization,” apparently in an attempt to pin blame for the weekend’s violent protests on the loose collection of far-left activists.

The president’s announcement was characteristically unclear. Federal law says that if the Secretary of State designates a group as a foreign terrorist organization, then materially supporting that organization becomes a very serious federal crime. There is no comparable domestic terrorism designation under existing law.

Setting aside the important factual question of whether groups of anti-fascist protestors are actually to blame for the violence, let’s look at whether Trump can “designate” them as terrorists.

If Trump’s “designation” is purely symbolic, the Constitution doesn’t come into it. Even without congressional authorization, the president can say what he likes -- including inventing a designation that carries no legal consequences.

However, if the Trump administration were to designate Antifa as a foreign terrorist organization, and the designation survived judicial review, then joining the group, funding it or coordinating with the organization in any way could be punished with harsh jail terms.

Here’s where the Constitution comes into the picture. Commentators have been quick to assert that it would be unconstitutional to apply the material support statutes to a domestic group. That’s roughly true, and it’s certainly not false -- but it is a significant oversimplification.

First of all, the federal designation statute, section 190 of the Immigration and Naturalization Act, doesn’t define what counts as “foreign.” All it requires in connection with foreignness is for the Secretary of State to find that “the organization is a foreign organization.” There is no statement about how many of the group’s members are inside or outside the U.S.

It is entirely possible that the State Department could develop an administrative record -- some of which could be classified -- finding that Antifa has a foreign component.

It is also entirely possible that the U.S. Court of Appeals for the D.C. Circuit, which has authority to review the designation, might decide to defer to the State Department with regard to what counts as foreign. So it would be a mistake to rule out the possibility that Trump’s State Department might designate Antifa as a foreign terrorist organization, thus triggering the material support statute.

Second, the Supreme Court has never expressly held that it would be unconstitutional for Congress to pass a law applying the material support statute to a domestic terror organization. Rather, when the Supreme Court upheld the material support statute in reference to foreign terrorist organizations, it said that it was not addressing the question of whether Congress could do so. As Chief Justice John Roberts put it in writing for the court’s majority in the landmark 2010 case of Holder v. Humanitarian Law Project, “We … do not suggest that Congress could extend the same prohibition on material support at issue here to domestic organizations.” That counts as a hint that such a law might be unconstitutional if applied domestically, but a hint is not the same as a holding.

Third, it’s crucial to understand that the Humanitarian Law Project precedent gives tremendous latitude to the government in restricting free speech -- including speech by Americans on U.S. soil that does not threaten or incite imminent lawless action. In that case, the Supreme Court held that peaceful speech by Americans in the U.S. could constitutionally be punished as material support for terrorism if it was made in “coordination” with the foreign terrorist organization.

If this sounds astonishing to you, that’s because it should. The Humanitarian Law Project case represented a radical deviation from the free-speech standard that the Supreme Court announced in 1969 in the famous case of Brandenburg v. Ohio. There, the court had held that under the First Amendment the government may not limit “advocacy of the use of force or of law violation except where such advocacy is directed to inciting or producing imminent lawless action and is likely to incite or produce such action.”

The Humanitarian Law Project decision said that speech defined as material support of terrorism could be punished criminally even if it was not directed to inciting imminent lawless action and was not likely to incite it.

In effect, the 2010 terrorism decision carved out a major exception to the classic Brandenburg rule. And that exception applied to domestic speech, albeit only to domestic speech made “in coordination” with a designated foreign terrorist organization.

Every year since the 2010 case, I have been asking my First Amendment students two questions: What would happen if the U.S. designated the KKK -- whose speech was at issue in the Brandenburg decision -- a foreign terrorist organization? And would it be constitutional if Congress extended the material support statute to domestic terror organizations?

As I have tried to suggest here, the answers to these questions are not simple. In the aftermath of Trump’s tweet, the questions are no longer classroom exercises. They’re directly relevant to the future of free speech in the United States.