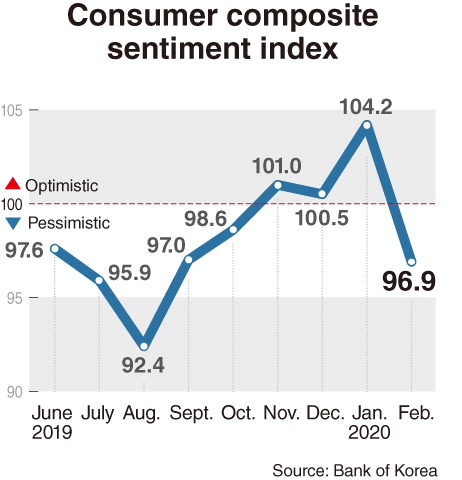 Consumer sentiment in South Korea has dropped noticeably since the outbreak of COVID-19, according to data released by the Bank of Korea on Tuesday.

The index, however, was calculated before the rapid increase in the number of infections here, meaning sentiment has probably fallen lower since then.

The consumer composite sentiment index totaled 96.9 in February, down 7.3 points from a month ago. A similar drop was seen in June 2015, when Middle East respiratory syndrome was in the news.

The drop in Korea’s CCSI is the third-largest on record. The largest was in October 2008, when it fell 12.7 points as a result of the global financial crisis. The next most serious drop was 11.1 points in March 2011, when a massive earthquake struck off Japan’s east coast and led to the Fukushima Daiichi nuclear disaster.