Tuesday, in the latest move to help eco-friendly cars expand their presence here.

Since 2017, the government has waived a 5 percent special excise tax on purchases of all-electric and hydrogen fuel-cell electric cars. 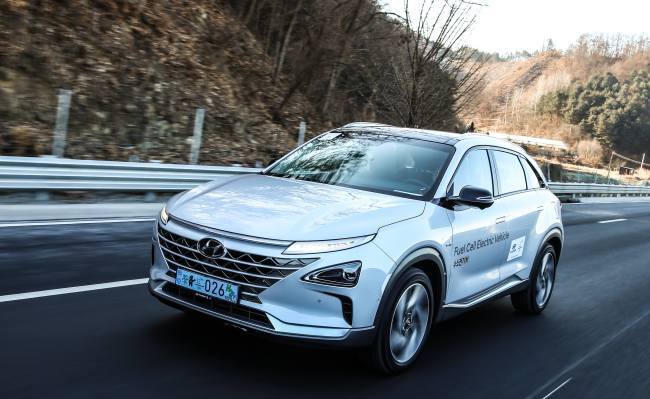 "The government will provide its utmost support to make sure the private sector can actively make investments," Hong said in a meeting with executives of Hyundai Motor Co. and other carmakers at an exhibition center in Goyang, just northwest of Seoul.

In December, Hyundai Motor Group said the company and its suppliers will collectively invest 7.6 trillion won ($6.5 billion) in a plant with an output capacity of 700,000 fuel cell systems by 2030.

Currently, Hyundai has one plant with an output capacity of 3,000 fuel cell systems, which are mainly used in its hydrogen fuel cell vehicles, such as the Nexo.

In January, South Korea said it will increase the number of hydrogen fuel-cell electric vehicles to about 80,000 units by 2022.

A hydrogen fuel-cell electric car only releases water vapor as it converts stored hydrogen into electricity to turn the motor.

Global carmakers have been racing to go eco-friendly amid tightened regulations on greenhouse gas emissions, which scientists say are to blame for global warming.

The number of environment-friendly vehicles, such as hybrid electric, all-electric and hydrogen fuel-cell electric models, sold in the Jan.-May period reached 65,030 units, up 27.9 percent from the same period in 2018, according to data from the Korea Automobile Manufacturers Association and foreign automakers.

The domestic market share of environmentally friendly vehicles was 10.6 percent in the Jan.-May period, up 2.6 percentage points from a year earlier, the data showed. (Yonhap)