By Park Han-na
Published : Apr 25, 2019 - 16:23       Updated : Apr 25, 2019 - 17:11
North Korean leader Kim Jong-un held his first talks with Russian President Vladimir Putin on Thursday, reaching out to the country’s traditional ally as nuclear negotiations with the US remain in a stalemate.

At 1 p.m., Kim and Putin started a one-on-one session, which was followed by a three-hour extended session with policy staff at Far Eastern Federal University in Vladivostok, Russia’s Pacific port city. 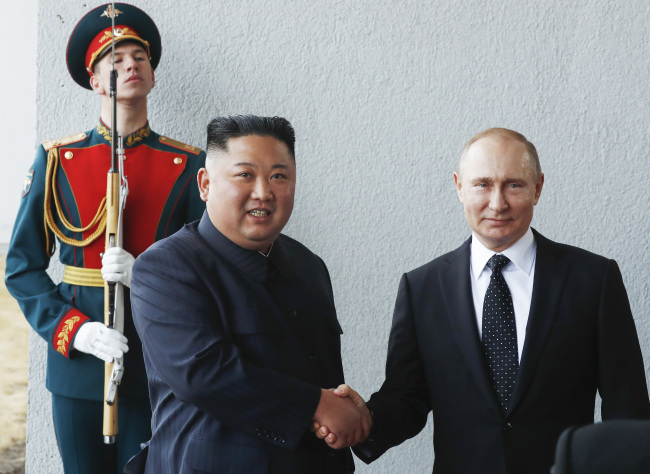 
Speaking to the media, the two leaders vowed to deepen bilateral relations and seek ways to enhance cooperation in resolving the situation on the Korean Peninsula.

Kim said the Korean Peninsula is at the center of the world’s attention and he expects the meeting will be a “very meaningful dialogue to assess peninsula policy together, share each other’s views and work together to jointly make adjustments and research going forward.”

Putin said Kim’s visit to Russia will “help to develop our bilateral relations and will help us to understand the ways we can help to settle the situation on the Korean Peninsula, what can be done together, what Russia can do to support the positive processes that are taking their place now.”

The two leaders avoided using the words “nuclear weapon” or “denuclearization” during the short media briefing, though the Kremlin earlier said the focus of the talks would be on finding “a political and diplomatic solution to the nuclear problem on the Korean Peninsula.”

Kim’s first trip to Russia came after his second summit in Hanoi with President Donald Trump failed in late February because of disputes over US-led sanctions on the North. Putin, meanwhile, wants to expand Russia’s clout in the region and get more leverage with Washington.

Since then, Pyongyang has been highlighting ties with Beijing and Moscow, apparently searching for economic and diplomatic support.

In the briefing, Kim said the two countries “have a long friendship and history” and that he hopes to develop relations into a “more firm and whole one.”

The two countries also discussed economic cooperation. Before starting the summit, Putin said the two need to “achieve a lot to develop trade and economic ties and humanitarian ties.”