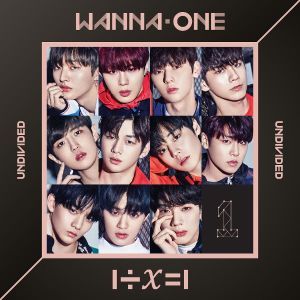 The clock is ticking for Wanna One, but the path the band has taken for its new album “1÷χ=1(Undivided)” is quite disappointing.

As a group that was handpicked through a Korean audition show last year, Wanna One knows what kind of music pleases the public. It has continued its winning streak with super catchy hits like “Energetic,” “I.P.U” and “Boomerang,” songs that fit into K-pop’s typical sonic standard.

But with “Light,” the UK garage-inspired lead track off the band’s new album, something big is missing. It’s neither catchy nor impactful -- and worse yet, after listening to the first 30 seconds of the song, I double checked if the song actually was the lead track. In a nutshell, the song feels like gulping down watery soup with a taste that quickly fades.

The EP features four other songs, which broke Wanna One down into smaller units. Each track, produced by a famous Korean artist, shows the exact color of its producer. “Kangaroo,” a summery hip-hop track produced by Block B’s Zico, is probably the most stand-out track, featuring punky rhythms and melodies that are unprecedented for Wanna One.

“Forever and a Day,” produced by Nell’s emotional vocalist Kim Jong-wan, is easy on the ears and is imbued with Kim’s evocative pop-rock ballad groove. It may be the Nell vocalist’s influence, but the song’s vocalists Yoon Ji-sung, Ha Sung-woon and Hwang Min-hyun also sound similar to Kim.

Things get funny with “Sandglass,” produced by Heize and featuring Ong Seong-wu and Lee Dae-hwi, as the song sounds like an obvious output of the sentimental singer-songwriter. “11,” a groovy R&B track produced by Gaeko and Choiza of Dynamic Duo, rounds out the album. Wanna One’s collaboration with Korea’s winning artists was definitely interesting, but the album misses out on Wanna One’s true colors.