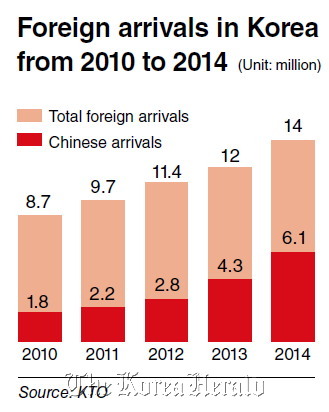 Chinese tourists accounted for the lion’s share of the 14 million foreign arrivals in Korea in 2014. The number of foreign arrivals in Korea has increased steadily since 2010 thanks to the hallyu boom across Asia, the no-visa policy for Chinese tourists visiting Jejudo Island and other regional factors. It reached the landmark figure of 11 million in 2012.

Mainland Chinese have made up some 43 percent of the total foreign arrivals in Korea this year. Including tourists from Hong Kong and Taiwan, the number of Chinese-speaking tourists surpassed 7.4 million, which accounts for 52.2 percent of the total foreign arrivals.
“The (close) proximity is one of the great advantages that draws Chinese tourists to Korea,” said Seo Young-choong, director of the China team of the state-run Korea Tourism Organization. “We saw more people coming from inland provinces as we focus our travel promotions on inland Chinese cities. The influence of the Korean Wave has definitely been a strong attraction for Chinese tourists.”

A series of external factors convinced Chinese tourists to travel to Korea such as the strained diplomatic relations between China and Japan, and unrest and accidents in Southeast Asia, including the missing Malaysia Airlines flight and anti-Chinese protests in Vietnam. Vietnam has been hit by a series of protests in response to the Chinese deployment of an oil rig in a disputed region of the South China Sea.

Chinese tourists were also the biggest foreign consumer group here, spending an average of $2,272 per person in 2013, according to the KTO.

Tourism income is expected to reach $17.6 billion by the end of this year, up 21.4 percent from last year. The Ministry of Culture, Sports and Tourism said this revenue creates jobs for 545,000 people in the tourism industry and equals the amount earned from exporting 3.7 million cellphones.

Korea has also seen double digit growth in the number of tourists from Hong Kong, Thailand, the Middle East and Russia with an average increase of 20 percent.

The government expects the number of Chinese tourists to continue to grow next year although maintaining a 40 to 50 percent increase may be a challenge. At the same time, concerns have been growing about the Korea tourism industry’s increasing dependence on the Chinese market.

“It’s important to diversify the range of foreign tourists to Korea. Muslim tourists have emerged as another large group of foreign tourists in Korea. We are targeting Muslim countries in Asia and the Middle East with new strategies,” said Rhee Jae-sung, vice president for marketing of the KTO.