By Korea Herald
Published : Jan 7, 2013 - 20:00       Updated : Jan 10, 2013 - 15:45
The Japanese government plans to provide financial assistance to a joint helium-production project between Japan and Russia to secure the precious gas amid a tighter global supply caused by increased demand from China.

The government will mainly offer funds to trading companies and other firms involved in the project at the Chayanda natural gas field in Sakha Republic, eastern Siberia. 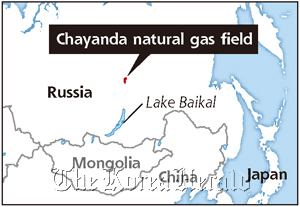 Helium is used in a wide range of products, from magnetic resonance imaging machines for medical use to balloons. Another aim of the project is to deepen ties with Russia through economic cooperation.

The government plans to start importing gas produced in the field in 2017.

Natural gas produced in Chayanda contains high-density helium, at 0.58 percent. It is estimated to be capable of producing about 7.2 billion cubic meters of helium ― about 500 times Japan’s annual imports.

Helium demand has surged partly because the number of MRI machines in China has increased.

According to Iwatani Corp., a major producer of liquefied petroleum gas, exports of MRI machines to China grew fourfold in terms of value over the six-year period to 2011. The company said it expects such exports to continue to increase.

An official of an energy-related company said “an international competition to secure helium” is already under way.

The crunch in supplies has affected services and businesses in Japan, with some hospitals having to discontinue MRI scans. Tokyo Disney Resort was forced to halt the sale of helium balloons in November for the first time since opening in 1983.

With helium demand expected to rise in growth industries in the future, securing a stable supply has become an urgent task.

The government thus decided to provide assistance to companies involved in the joint project in Russia, including Itochu Corp., Marubeni Corp. and INPEX Corp.

The funding will be provided through Japan Oil, Gas and Metals National Corporation and Japan Bank for International Cooperation.

Russia’s state-run Gazprom will play the leading role on the Russian side.

As Gazprom plans to transport natural gas from the Chayanda field to a liquefied petroleum gas plant in Vladivostok through a pipeline, Japan will cooperate in building a facility near the plant for separating helium from the natural gas.

The government will offer financial assistance and technological aid toward this end.

On Dec. 21 before taking office, Prime Minister Shinzo Abe said at a press conference, “I think [Japan-Russia relations] can be a bilateral relationship with great possibilities.”

Russian President Vladimir Putin is said to be enthusiastic about cooperating with Japan in energy fields.

If the project is successful, Russia will be able to export helium not only to Japan but also to China and other countries.

A senior official of the Economy, Trade and Industry Ministry said, “The project will reap benefits for both Japan and Russia.”

Helium’s boiling temperature is the lowest among all elements at about minus 269 degrees Celsius.

The gas is essential in research sites with temperatures near absolute zero ― about minus 273 degrees Celsius ― for instance in studies on superconduction. The element is also used in manufacturing fiber optics and semiconductors.

Helium is a by-product of drilling natural gas. Only if the right density is reached and other conditions are met can the production of helium be profitable.

The U.S. produces about 75 percent of the global output, with 98 percent of Japan’s helium imports between January and October 2012 coming from the country.

As the U.S. is shifting its core supply of natural gas to shale, which is not suitable for producing helium, it is feared U.S. exports of the gas will shrink further.